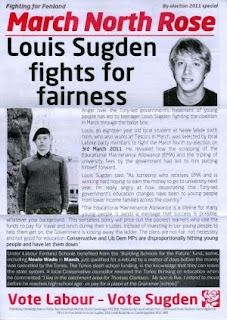 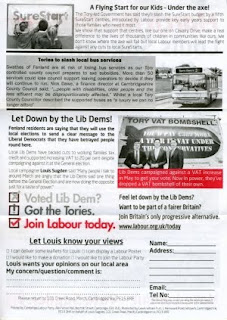 18 year old Louis as Labour candidate, doubled Lobour's vote and pushed the Lib Dems into third, with a 7% swing from the Tories

Labour activist, Martin Field, said: “The Lib Dems had 30% in March North in 2009- more than twice the Labour vote- but they are now third. Being the challenger to the Tories is virtually their raison-d’etre in the south east. If they start coming third, they are truly toast.”

18 year old Louis Sugden, who goes to Neale-Wade Community College’s sixth form and works at Tesco’s in March, put himself forward as a candidate after becoming angry at the coalition’s treatment of young people.

He said: “As someone who receives EMA and is working hard hoping to earn the money to go to university next year, I’m really angry at how devastating this Tory-led government’s education changes have been to young people from lower income families across the country.

“The Educational Maintenance Allowance is a lifeline for many young people. It sends a message that success is possible, whatever your background. The Government’s arguments for scrapping EMA have been completely discredited, with the Institute for Fiscal Studies saying that its costs are ‘more than recouped’.

“This senseless policy will price out the poorest learners who use the funds to pay for travel and lunch during their studies.

“Instead of investing in our young people to help them get on, the Government is kicking away the ladder. The plans are not fair, not necessary and not good for education.

“Conservative and Lib Dem MPs are disproportionally hitting young people and have let them down.”

Peter Roberts, Labour’s former Parliamentary spokesperson for NE Cambs and chair of the Cambridgeshire Labour Party said: “Louis’ example shows just how angry young people across Cambridgeshire are about the cuts the government are making.

“Voting yellow or blue is now indistinguishable, both parties have let local people down over the last few months; delivering policies from a hidden joint manifesto such as votes for prisoners, removing child benefit, cutting Sure Start funding, hitting rural bus services and raising VAT.

“Louis embodies the emphasis on youth and change spelled out by new Labour leader, Ed Miliband.”