The People of the Forests ARISE ! 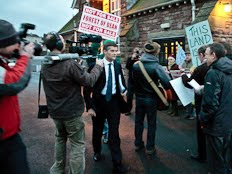 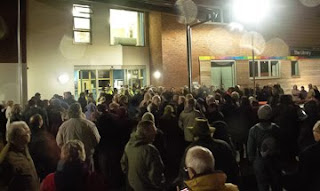 A growing revolt is in full swing in the English Countryside. Rural Communities are banding together to take direct action to prevent the Tory/Lib Dem privatisation of England's great forests.

On Friday, Tory Minister Mark Harper, MP for Forest of Dean was heckled and pelted with eggs by a huge crowd, including Country Standard supporters in the small town of Coleford.

The meeting in the local Library was full to bursting with further 500 outside in the street. The protesters chanted of 'Hands off our Forest' and 'Get Harper out' could be heard throughout the meeting and long into the night.

The huge crowd spilled over into the main street, with local residents and passerby signalling their overwhelming support.

It did not go unnoticed by those fighting the privatisation of the Forest of Dean that the building the meeting was held in Coleford Library, is also threatened with closure by the Tories.

Next Stop the New Forest ! 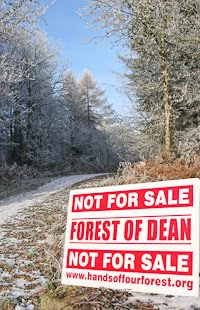 "Mark Harper, the Conservative MP for The Forest of Dean, was attacked by protesters as he exited a public meeting where he had been defending the Government's plans for a forestry sell-off.

He was pelted with eggs by protesters who also attacked the police van to try to prevent him leaving.

Mr Harper accused a number of objectors of being "bent on violence" and likened them to a "baying mob".

The public meeting, which took place in Coleford in Gloucestershire on Friday night, will have given the Coalition a worrying insight into the growing anger its forest consultation has provoked.

One Tory MP has already warned the sell-off could be the Government's 'poll tax moment'.

"What do we want? The Forestry Commission. When do we want it? Now. In the past 10 days the coalition has performed the seemingly impossible feat of turning a dreary nationalised industry into the last redoubt of Merrie England. Watch out, its ancient greenwood is to be sold off or leased to axe-wielding spivs. So farewell, the woods that once sheltered Robin Hood; adieu the hearts of oak that kept the Royal Navy afloat.

Anyone who remembers how the view on a country walk has been spoilt by an ugly, dark wall of Christmas trees will be sceptical of the Forestry Commission’s stewardship of our green and pleasant land. Charles Clover, our environment columnist, sees merit in the government’s proposals.

However, there is no disputing how unpopular the policy is — opinion polls reveal more than 70% reject it. Damian Green, the luckless Tory minister who had to defend the measure on BBC’s Question Time on Thursday, was howled down. Conservative HQ had supplied him with an incomprehensible debating point about the Forestry Commission’s conflict of interest as regulator and timber merchant. He was chopped up for firewood."