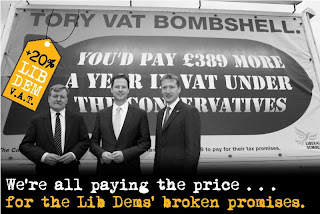 Before the General election the Tories promised to introduce a "fuel stabiliser" to avoid excessive fluctuations in petrol at the pump.

Now in Government, the Tory/Lib Dem Government have set about raising VAT on Petrol forcing the price of a gallon of petrol towards £6, with another tax rise planned for April 2011.

With a growing outcry at the growing cost of petrol, the Government have belatedly worked out that such a move will impact disproportionately upon rural communities, coupled with theTories slashing rural bus and train services.

Both Cameron and Lib Dem Minister, Danny Alexander have claimed they are examining the introduction of a "fuel stabiliser" and "action to specifically help rural areas".

Danny Alexander Treasury Minister, stated in the Sunday Telegraph (16th January 2011) that "remote areas would soon be able to enjoy a discount on the duty they pay for petrol".

He said: "We recognise that this for many families is a serious issue. We are seeking to address that problem by looking at this idea of a fair fuel stabiliser, by taking steps to relieve the burden of fuel costs in the most remote communities."

Yet as with bankers bonuses, rural communities should be very cautious about believing such "woolly" statements. Remember, Cameron stated previously that he would tackle bankers bonuses and limit them to £2,000 a year, in reality nothing happened and the the Tories friends the bankers are still cashing in million pound bonuses, courtesy of the Government of millionaires.

The truth is this Tory/Lib Dem Government will not hesitate to abandon rural communities on issues such as the cost of fuel and cuts in public services. Rural Tory and Lib Dem MP's will be silent and their friends in the NFU and Countryside Alliance missing.

Rural Communities urgently need to stand up and be counted, take direct action to defend their way of life on all fronts.