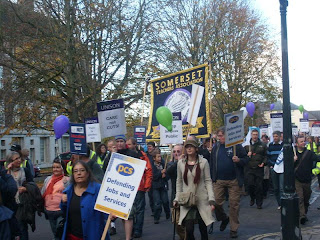 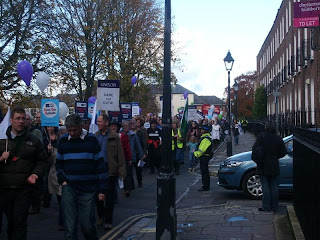 Protesters march against the cuts

An estimated thousand demonstrators marched through Taunton on Saturday 6th Novemeber and attended a mass rally to protest against Somerset County Council’s proposed budget, which is set to slash £43 million from public services in the county with a loss of 1,500 jobs.

As the sea of banners and placards of parties, trades councils and union organisations came through the town centre, local residents and Saturday shoppers clapped, cheered and waved to the marchers in support.

The demonstration was organised by UNISON and supported by the Taunton and West Somerset Trades Council. Nigel Behan, secretary of the Trades Council, said of the County Council’s budget proposals: “This level of cuts will make Somerset as we know it unrecognisable. All areas of spending have come under the axe and there is not a family anywhere that will be unaffected. The people of Somerset are being made to pay for a situation that is not of their making and it is the most vulnerable that will be hit the hardest.”

At the rally the line-up of speakers included the NUT, UNISON, PCS, the RMT, the Labour Party and Green Party. Ross Henley, the Lib-Dem leader of the opposition at Taunton Deane Borough Council and a Somerset County Councillor condemned the cuts and stated that in some cases they would be more expensive to implement than the amount they would save. Rob Thompson, a local sixth form student, condemned the cuts for the impact they would have on the his generation, denying children and young people the opportunities they needed to learn and flourish without having to fear the future. Speaker after speaker stepped forward to tumultuous applause to condemn the cuts outright and deny absolutely the Coalition propaganda that ‘we are all in it together’.

This was the first time for many years that Somerset had seen such a demonstration but UNISON’s campaign organisers agreed that it was only a beginning. An organiser said, “People from all walks of life have today vowed to stand together to defend jobs, public services and communities in Somerset”. She added, “We will organise and challenge the Council in every workplace, every organisation and every community in Somerset. This Tory County Council will never have our support”.

According to the budget that is being taken forward, the cuts are to be taken from the adult social care budget and the special education service. Subsidised bus services, bus passes and student transport will be axed, as will the library budget, forcing some libraries to close. Community policing will be cut, reducing the number of officers on the streets. 75% of funding for youth services will be withdrawn, as well as 100% of funding for theatres and arts groups. Eight household recycling centres will close and the road repair budget will be so severely reduced that an increase in road deaths and serious injuries will be inevitable.