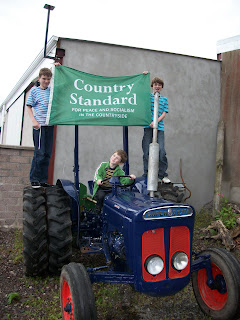 The AWB, which since 1923 has provided a degree of protection for the pay and conditions of hundreds of thousands of rural workers, was one of the shock casualties of the government's "bonfire of the quangos."

Unite national officer Ian Waddell said: "This policy is a betrayal of rural workers and a deception of the communities in which they live."

He added: "Abolition of the wages board was not in the coalition agreement.

"The Lib Dems did not stand for election on this, but they are helping implement a Conservative plan to break the wages of rural workers."

Labour MP Paul Flynn accused the "Tea-Party wing" of the Con-Dem government of setting out to demolish a whole list of quangos out of "political spite and malice."

Mr Flynn spoke out at a session of the Commons public administration committee after trade union leaders had complained to MPs about insulting comments from government ministers and an almost total lack of consultation on quango closures.

Civil Service union Prospect deputy general secretary Dai Hudd also complained to the committee that junior Communities Minister Bob Neill had accused workers of "taking the taxpayer for a ride" and "living it up at taxpayers' expense."

Warning of the high financial cost of quango closures, Mr Hudd said abolition of the Audit Commission would save £50 million, but costs of redundancy and other resulting costs would probably be £200m.

He added that as many as 4,000 Prospect members faced losing their jobs as a result of quango closures.

Public service union PCS director of bargaining Geoff Lewtas said that thousands of his members also faced the axe, although it was difficult to give a precise figure since some workers would be transferred to other departments, which also faced big job cuts.

To implement its massacre of the quangos, the government is rushing the Public Bodies Bill through Parliament.

Ministers hoped it would receive its second reading in the Lords last night, despite some opposition.