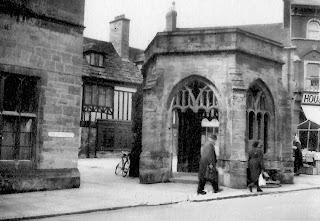 Sherbourne
Going back to black and white,
rich and poor
Blogging in Lib Dem Voice former Lib Dem parliamentary candidate and housing advisor, Sue Farrant points out the reality of life under the Coalition in the South West. It is a brave, honest and undoubtedly a heartfelt plea for her rural community, but her concerns are set to go unanswered.

I am so worried about what is likely to happen to housing and employment in the
south west of England
"Will the private sector be able to grow fast enough to compensate? I live in Sherborne, a pretty little market town which is renowned for its variety of small, independent retailers. They sustain the local way of life, provide some limited employment opportunities and attract visitors who are looking for something different. Sadly, there are now a number of empty shops in the picturesque high street and several more with ‘business for sale’ notices in the window. The charity shops and the chains are the beneficiaries. The town does not convey a sense of private enterprise just waiting for an opportunity to burst into vigorous new life".

"The decision to cut the capital programme by 60%, remove house building targets, allow social housing providers to charge rents up to 80% of market levels and to offer fixed term tenancies seems to me to be a package that is highly unlikely to stimulate a frenzy of construction. It might, though create a great deal of anxiety amongst people who are already struggling with the higher transport and food costs that are part and parcel of living in a rural area."

"In West Dorset the average house price of £242,000 means that you need a gross income of around £62,000 just to get a mortgage. With average incomes standing at just £18,720, buying a home is beyond the means of most people in West Dorset. It’s not surprising that more than 2,000 households are on social housing waiting lists. Meanwhile, just over one in twenty houses here is someone’s second home."


"I know that housing is a complex issue and I know that very difficult decisions have to be made. But decent housing is absolutely fundamental to the well-being of individuals and to communities. Without a secure home to provide warmth and adequate space, people suffer physical and mental ill-health, children don’t get the full benefit from their education, adults find it hard to organise their lives and relationships break down."

"Am I taking too gloomy a view of the government’s current programme? Perhaps, but right now I am so worried about what is likely to happen to housing and employment in the south west of England that I can’t give the positive initiatives the welcome they deserve."

Sue Farrant was the Liberal Democrat candidate in the marginal seat of West Dorset in the 2010 general election, narrowly losing to the incumbent Conservative MP, Oliver Letwin.
at Saturday, October 30, 2010