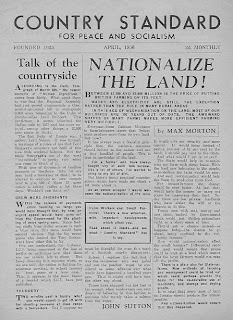 In this age of mechanisation on the land, most of our buildings are 100 years out of date.

Everyone— from "Cabinet Ministers" to farm-labourers—agree that Britain must produce more from its own land.

t has always been a Socialist principle that the nation's resources should 'belong to the nation and not a tiny handful of people. This is true in particular of the land.

I'm a farmer and have always fought shy of such talk because, like a lot of others, I've wanted to cling to my bit of dirt.

But there's many practical considerations which have made me think a lot more about it.

As an owner occupier I would welcome the nationalization of the land. It would give me security and more capital. It would mean instead of paying interest of 6i per cent to the bank, I should pay rent to the State.

And what would I get in return?

The State would help in re-equipping my farm with cheap loans. With the land now belonging to the people, re-modelling my farm would be easy:

And such reorganisation would help the State by producing more food.

For tenant-farmers the change would be even better. At last they would have the money to carry out plans for improving their land. To-day there are few private landlords who have either the will or the finance to do this.

Young men with zeal, energy and new ideas, backed by Government funds, could put British agriculture right in a short space of time.

They'd get a chance instead—as happens today—the chance to go ahead, being confined to. the rich "hobby farmers."

How would nationalization affect the small farmers? Differential rents for land would ensure that prices could be kept at a level which meant that the large farmers would not reap all the profits.

There is a place also for State-run farms. New methods of farming and management could be tried out which could perhaps provide the basis for the co-operative use of machinery and storage and drying plants.

it is vital that every acre of land in Britain should produce the utmost possible.

And Nationalisation would ensure this happened

A farmer who lived with his wife Dorothy Morton, also an active Communist Party member. East Anglian District Communist schools were held at their farm house with Maurice Batters, Jean Deaken and the famous Isobel Brown in attendance in the late 1940s.

Max Morton (Paines Manor, Pentlow) was elected as a Communist councillor to Pentlow Parish Council in the early 1960s and wrote regularly for the Communist journal the Country Standard and Leiston Leader.