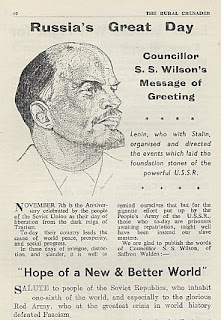 Work in the Countryside

"It goes without saying that we must utilize all the opportunities that present themselves to us to develop the class-consciousness of the agricultural wage workers, and. that we must pay attention to the urban workers who go into the country districts . . . ," wrote Lenin in April, 1901.

There are a million and a quarter people engaged in agriculture in . And what is much to the point, the majority of them see the ruin of the land and are disillusioned of the promises made after the last war.

The workers are grossly underpaid at round about 34s.a week, and their livelihood depends on absolute subservience to their master, whatever .his whim or temper.

They are spied upon by church visitors. Out of work or in illness they can only exist on the charity doled out in half-pints of milk or sixpenny worths of meat from these people.

Now for a few hints as to how to help the Party in the countryside. Speak to the agricultural worker as you would to one of your fellows whom you want to win over. You will find he will be interested and, moreover, that you will find many things in common.

The best way to clinch a prospective convert is by getting him to take a paper. In towns you can get the Daily Worker, but it is not easy in the country. Yet every class conscious town worker should take at least one copy of the Country Standard in his pocket whenever he goes into the country on his half-day, and sell it to a farm worker. The country worker will soon see that it is a paper that gives expression to what he so urgently feels.

If this little paper were really circulated throughout the country districts regularly, it would win the majority of country workers' votes for Labour at the next election, votes that are now cast for reaction because of our neglect of these workers. If town comrades help, it would be so simple to get a circulation of fifty thousand a month, at least, by the end of the summer.

Already some Labour organisations in country districts know the worth of the Country Standard and organise its distribution.

No doubt you will have some failures which are not your fault; but, in most cases, you should be able to sell a penny Country Standard.

In the village pub, especially on Saturday night, are many kinds of rural workers: garage hands, small shopkeepers, smallholders, etc. Here, then, there is, besides the Country Standard, certainly also a sale for the Daily Worker and pamphlets.

Two quires of the "Worker" and two dozen "" pamphlets were sold by two comrades in that way one Saturday night.

The help which can be given to the comparatively few of us in the countryside, by town workers carrying out a few of the above suggestions cannot be too heavily stressed.

It will increase our effectiveness a hundredfold. Lenin, in Left-Wing Communism, says again:

" Communist Parties must . . . canvass the cottages of the rural proletarians and peasants in the remote villages {fortunately there are not nearly so many remote villages in Europe as there are in Russia, and in England there are very few), they should go into the public-houses . . . where common people gather and talk to the people. . . ."

1. Country Standard. At all Workers' Bookshops, or c/o Maclaurin, Bookseller, 5, All Saints Passage, . 10d. a dozen.

2. Plan for 's Agriculture. Communist Party of Great Britain, 1d Obtainable from all Workers' bookshops at 9d. per dozen.

3. Special new Party leaflet on agriculture, obtainable at 9d. a hundred or 5/- a thousand, post free.

Wilfred Willetts a leading of the Communist Party in Kent,

Wilfred Willett was severely injured in World War One and wrote numerous books and articles on birds and nature. He was a regular contributor to the Communist Party rural journal, the Country Standard, as well as the Daily Worker. He later became the chief fund raiser for the Country Standard. He had been was involved in the organisation into the NUAW of agricultural workers in the Weald area of South East England and lived at The Rosery, Matfield, near Tonbridge in Kent. Willett died in 1961. His granson is Anthony Seldon who wrote a biography of Tony Blair

S.S. Wilson (Stanley Wilson) was a famous Left Wing Labour Councillor Mayor and County Councillor for Saffron Walden , Essex. Was heavily involved with the Rural Crusader (The Essex based rural journal of the Communist Party and Left Wing within the Essex Labour Party