ANNUAL SUMMER SCHOOL 1934 OF THE
NATIONAL COUNCIL OF LABOUR COLLEGES

During the fortnight beginning August 25.1934

The students at the first week of the school will have the opportunity of participating in the Dorchester Labourers' Centenary Commemorations, while the students at the second week will be able to visit the Trades Union Congress at . During both weeks it will be possible, of course, for students to visit the historic village of Tolpuddle.

A Summer School is one of the finest ways of spending a holiday, because it combines the necessary change of air and surroundings with good fellowship and stimulating discussions difficult to get elsewhere.

House is ideally suited for Summer Schools. It stands in its own grounds, has a beautiful garden and facilities for tennis and. other games. has a very lovely countryside, and the town of itself is only about eight miles from the famous seaside resort of and is of great historic interest.

Each week of the school begins after lunch on the Saturday and finishes after breakfast on the following Saturday. Students may, however, book for the whole fortnight. The fee in either case is £3 per week including a booking fee of 5/-
For Programme of Lectures send a stamped addressed envelope to
J. P. M. MILLAR, General Secretary, N.C.L.C., 15 , , N.W.3 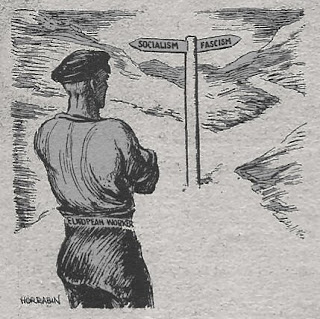 That is the issue that is facing the working class in nearly every civilised country in the world. A hundred years ago, in an attempt to crush the Trade Union movement in , the governing class made martyrs out of six Dorsetshire labourers. That, however, did not stop the development of the working-class movement.

It grew enormously, not only in , but in , , and in fact in every country where modem industrialism had taken root. Recently, however, economic conditions have given birth to Fascism with the result that in , , and some other countries the working-class movement has been wiped out or driven underground.

At its 1934 Summer School, the N.C.L.C. is, therefore, providing an opportunity of discussing the history of the working-class movement and the vital problem which the growth of Fascism is posing.