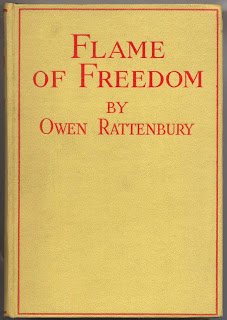 (The romantic story of the Tolpuddle martyrs)

The Bibliography reveals to some extent my methods of getting information. There are strange silences in the literature of the period that may indicate anything or nothing. For instance, the published letters of Mary Frampton cease a few months before these events happened and resume a few years later. Was she the indiscreet member of the family ? Did she reveal Squire Frampton's dealing with Lord Melbourne and Baron Williams ? Or was she a supporter of the men who were transported ? Perhaps some day those suppressed letters will come to light. They should be exceedingly interesting.

My aim in the book is to show that the source of the heroism of Loveless and his companions was their Methodism, with its sturdy independence, its realistion of the value of the individual soul, its love of justice, its freedom complex. That is not the official Methodism of the time, which was more concerned with matters of discipline and doctrine. It is a Methodism that officialism thought of no importance, but which has lasted after the decease of the other.

I must express my debt to Mr. S. J. Patten, of Molland, , who first asked me to write this story; to Mr. Alan Burden, of , who gave me access to his father's valuable papers; to Mr. H. F. Bridle, of Weymouth, who lent me the Diary of George Loveless which his father—Councillor Bridle—had preserved; to friends whose political and religious outlook is largely my own and whose literary work has helped me, including Mr. W. G. Hall, M.P., and Rev. Reginald W. Sorensen, M.P.; to Rt. Hon. Arthur Henderson, M.P.for his Foreword ; to Rt. Hon. C. Addison, M.P., who spoke with me at the annual demonstration at Tolpuddle, and whose address put me on to another line of research which added much to the historic value of my book ; to my wife for her brain-wave which gave me a title for the book.

There are many others who have contributed. Perhaps the greatest helps have been unconscious, such as that of the British Museum Library Assistants, and that of the Webbs and the Hammonds in so carefully documenting their historical books and thus saving endless searching through catalogues and news-paper files. To all of these, I express my unqualified thanks.