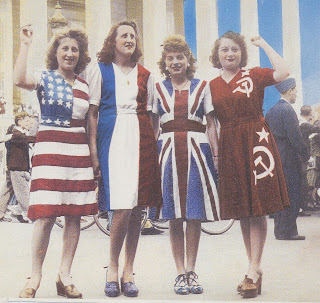 It was a revelation how not only were issues concerning the interests of the workers in their factory dealt with in a crisp and efficient fashion, but also the wider issues intimately bound up with winning the war and the betterment of the whole working class—such as demands to the Government for the immediate opening of a second front in Europe, a new approach to the Indian peoples, affiliation of the Communist Party to the Labour Party, etc.

The N.U.A.W. representatives were called upon by the chairman to address the meeting. Mr. Wilfred Willett said how much it was "appreciated that these industrial workers should invite representatives of farm workers and so initiate a closer unity between industrial and agricultural workers. It was vital that there should be unity both in winning the war and if we were to have a better afterwards.

The farm workers needed all the support and help the more organised industrial workers could give them, and he appealed to them to give that help and support as much as possible.

The farm workers were hindered from organising by vicious victimisation. It was not only a case of a farm worker joining his union being given the sack, but with it came the loss of his home. In the last few weeks a union member in who was an appointed representative of the workers on a District W.A.C. had been given notice and now had an eviction order against him. It was medieval tyranny for an employer to have the power, and use it, of turning- a worker, his wife and little children out of their home at a week's notice.

That evening the question of holidays had been raised. He suggested that those who could should come into the country and help in getting in the harvest. There would be a shortage of labour to get the harvest in, and if this was not done we might very well be short of food.

If any industrial workers went on a farm, Mr. Willett appealed to them to do everything they could to help build Trade Unionism and working class unity.

The statement was greeted with appreciative applause. The chairman said the shop stewards would see that all workers were acquainted with what had been said and they would see that all the support they could give the farm workers should be given.

There was then a discussion and resolution proposed and passed unanimously demanding that the Minister of Agriculture take immediate steps that farm workers should be allowed to take advantage of Trade Union rights and practices without fear of victimisation on the farms.

A second resolution demanding the abolition of the tied cottage system was' also passed unanimously.

The chairman, on behalf of the meeting, expressed the hope that these visits of agricultural workers' representatives would continue from time to time and that some of their representatives would also be invited to attend N.U.A.W. meetings in order to cement this unity between industrial and farm workers.

Willett was severely injured in World War One and wrote numerous books and articles on birds and nature.

He was a regular contributor to the Communist Party rural journal, the Country Standard, as well as the Daily Worker.

Wilfred Willett later became the chief fund raiser for the Country Standard. He had been was involved in the organisation into the NUAW of agricultural workers in the Weald area of south east England and lived at The Rosery, Matfield, near Tonbridge in Kent. Willett died in 1961

His daughter Marjorie Willett married the economist Arthur Seldon in 1948, moving to Orpington, where Marjorie organised demonstrations against the Suez invasion. Their son Anthony Seldon was Blair’s biographer,