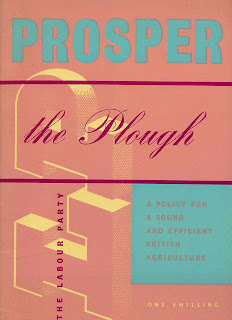 NO MAN had more to do with the abolition of the tied-cottage system than Reg Bottini. (I say man because Bottini would have given a lot of credit to Joan Maynard, later MP for Sheffield Brightside but a fellow official of the agricultural workers' union.)

In May 1976, thanks to Bottini's work, Peter Shore, then Secretary of State for the Environment, rose in the House of Commons to introduce the Rent (Agriculture) Bill, a measure affecting the lives of large numbers of people who had been subjected to a relationship that was outmoded, unacceptable and unjust.

The abolition of the tied cottage had been a major objective of farm workers for almost a century. As long ago as 1885 Joseph Arch of Barford, the founding father of the National Agricultural Union, became a Member of Parliament for the North West Norfolk division. Arch was the first agricultural labourer to be an MP and he called for equal security for farmers in their holdings and farm workers in their cottages.

His union's successor, the National Agricultural Labourers and Rural Workers Union (today the National Union of Agricultural and Allied Workers- NUAW), was formed in 1912 and brought in as members not only farm workers but also carters, roadmen, gardeners and navvies, while women were admitted for the first time.

It made the abolition of the tied cottage part of its campaign. By the mid-1970s there were some 70,000 agricultural tied cottages in England and Wales accommodating about half the total number of full-time farm workers and their families and another 20,000 cottages occupied by retired farm workers. Every year until 1976 some 1,200 families faced eviction - often in distressing and humiliating circumstances - when the farmer obtained a court order for possession.

The Rent Bill set out to change this situation and to change it radically. A taste of Bottini's passion can be inferred from the speech I heard him make on 3 October 1976 at the Labour Party Conference: I call for security of tenure for service tenants, a service tenant being a man or woman whose home goes with the job and literally goes with the job . . . I can say that at 12 noon one of our members and his wife who has a heart condition will be evicted from their farm cottage. Agriculture is not alone in being subject to that kind of arrangement, but in agriculture it assumes its most oppressive form. Ours is a fragmented industry, a scattered labour force in small numbers and 51 per cent of the workers live in tied cottages. These provide the farming employers with a captive labour force which finds it difficult to resist unreasonable demands from its employers. Small wonder the farm workers' income rates are the very lowest paid, despite their versatility, despite their greatly increased productivity. The tied-cottage system in agriculture constitutes a trap from which the farm worker with a family finds it virtually impossible to escape. The farmers argue of course that the system facilitates nobility of labour. So it does, from one tied cottage to the next. My union is obliged to arrange legal representation in about 500 cases each year where employers are seeking possession of farm workers' homes and ultimately there is no legal defence. Many workers will do anything to avoid the stigma of being the central figure - I should have said the central victim - in court proceedings for possession. The worry and strain suffered by families in these circumstances can be readily imagined.

He was born Reginald Norman Bottini into a family of Italian restaurant workers who had arrived in Tooting in the early 1900s. His father was killed in the First World War in France when he was barely a year old, causing him to become a conscientious objector during the Second World War.

After leaving Bec Grammar School he became a shipping clerk and then during the war worked in land drainage where dampness gave him health problems.

He was appointed a very junior assistant in the legal department of the National Union of Agricultural Workers. By dint of hard work he became head of their negotiating department in 1954 at the age of 38.

His friend Sonia Bray told me he was so keen to join the Labour Party he applied at 16 when 17 was the entry age. He was one of the few in the agricultural union who devoted themselves to helping the party and he was the brains behind the memorable policy document Prosper the Plough, published with Hugh Gaitskill's authority before the 1959 general election.

When I was a very young candidate in the rural constituency of Roxburgh, Selkirk and Peebles, Prosper the Plough (1958) was my election bible. It called for a sound and efficient agriculture programme operating at a high level of production, which it saw as essential for the long-term economic stability of Britain.

The Government could ruin farmers and farm workers by allowing artificially (and perhaps temporarily) cheap foodstuffs into the country. On the other hand it could copy other countries and protect our agriculture by high tariffs - by letting in imports only at prices too high to compete with home production.

This would lead to inefficiency and high prices which would be unfair to consumers. Another way of assisting agriculture was to have a system of guaranteed prices for home products that, combined with other forms of help, would give agriculture a high measure of assistance without isolating it from world events. It was this method of supporting agriculture that the Labour government decided upon when it was preparing the Agricultural Act of 1947, on which Bottini worked in a junior capacity.

As this method involved the expenditure of public money in paying for subsidies, grants, administrative machinery and advisory services Bottini saw that agricultural policies inevitably and properly became subjects of political concern. The level of the guarantees and the method of implementing them; the quantity of production to which guaranteed prices should apply; and the encouragement of efficiency were all matters on which Bottini made himself an expert.

It was partly on account of his mastery of these complex issues that he was chosen in December 1969 as General Secretary of the National Union of Agricultural and Allied Workers. The other consideration was that he had become a leading member of the Agricultural Wages Board since 1963. My particular memories of Reg Bottini are of his annual contribution to the Labour Party Conference throughout the 1970s when he opposed British entry into the Common Market and his ringing chastisement of the community. I

n a small group he was superb on matters such as forestry and, when I had a constituency problem involving some forestry workers on a new plantation in West Lothian, he was an effective trade union official in getting the problem resolved. Reg Bottini was a man who would always help others and he continued this into a most worthwhile retirement, caring for his beloved wife, Doris, for her last five years.

Sir John Farr, the former Conservative MP for Market Harborough, once told me he thought extremely highly of Reg Bottini's voluntary work. It was a testimony to the regard for him in the agricultural community that the Farmers Club made him one of their honorary life members.