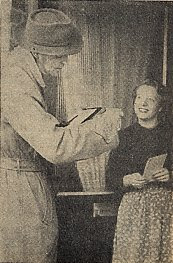 Well known artist and Communist, Paxton Chadwick was born on 4th September 1903 at Fallowfield, Manchester. As a child he showed great talent as an artist and went on to attend Manchester Art College in the 1920s. After leaving art college, he set up as a commercial artist in a studio first in Manchester, then in 1931 to Chelsea in London and from London’s west end to Welwyn Garden City.

Chadwick was then offered a part time post as art teacher at the pioneering and controversial Summerhill School at Leiston in Suffolk.

At Summerhill, he came into to contact with a number of teachers in the Communist Party, notably Vivien Jackson (herself the daughter of a prominent CP writer and printer) Max Morton, Richard Goodman and Cyril Eyre (who had joined the CP at Oxford University in 1933).

In 1934 a contingent of Hunger marchers passed through Leiston, the reception organised primarily by this group led to a crowd of over 1,000 welcoming the hunger marchers into Leiston. This in a town with effectively no history of radicalism or trade unionism.

Indeed, for many years following this event Leiston became maybe not quite a “little Moscow” but never the less a beacon for progress in a sea of East Anglian darkness, known throughout the region as “That communist place” according to John Saville “a tribute to the dedication, energy and intelligence of the quite small group of political activist”

The progressive forces being helped by left wing Labour activists such as Cllr Harry Silf of Stowmarket, Alec Brown an author, Trevor David of The National council of Labour Colleges as well as securing the support of non conformist in the town including Methodist preacher Tom Morgan (Chairman of Leiston Left Book Club) and a number of local Quakers.

By 1935 Chadwick had joined the Leiston Communist Party. The local Communist Party threw itself into “popular front” work encouraging local left wingers in the Labour party to join with the CP in defeating the well entrenched Conservative majority on the local council. The almost unique unity of the CP and Labour in Leiston was to be a feature for many years to come.

The focus for the Leiston popular front work would be the Leiston Leader, the first edition of which was produced in January 1936.

During the war Chadwick was called up into the anti-aircraft arm of the Royal Artillery where he continued to carry out council work and produce a wall newspaper for his unit. Chadwick ended the war as a Captain.

As chairman of Leiston council, he introduced a regular “open nights ”where electors could quiz councillors”, secured affordable housing, clean water, fought to abuses in the private rented sector, fought for improved war pensions and led the campaign to save the local Grammar school.

He also gave support to the annual Co-operative fete, Leiston thereafter could always be relied upon to secure a sizable Communist and left Labour vote and it was not uncommon to see Chadwick’s red and white Communist posters in house windows throughout the town.

But the CP’s electoral work was hampered by its size, for example in 1958 council election the Leiston Communist party could rely on just sixteen members of whom five were pensioners. Help had to be secured by the District Secretary, Neville Carey, from Ipswich and there was only one car (one more than the Labour Party) to help get electors to the polls. Chadwick himself stood for election last in 1960 and only narrowly missing out on being elected.

Paxton Chadwick was a first class artist and produced numerous nature drawings for Penguin books from 1949 until his death. He died in Whitworth hospital, London on 6th September 1961 and his funeral address was given by Communist Party General Secretary, John Gollan.

Note: Leiston had a Communist councillor in the 1980's
Paxton Chadwick Close named after him
at Sunday, March 04, 2007