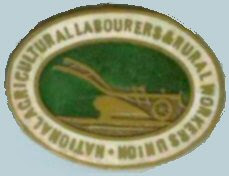 On July 20th 1906 a meeting was held at the Angel Hotel, North Walsham, Norfolk to establish a new Agricultural Workers Union The Union was called the Eastern Counties Agricultural Labourers & Small Holders Union

However little could be done to organise before the end of that years Harvest, but a start was made in St Faiths (Stronghold of the Arch's National Union) and Kinninghall and Shipham Between September 1906 and December 1906 George Edwards spoke at 88 meetings and established 57 branches with 1,600 members

By the end of the year Thomas Thacker of East Dareham had been appointed as Assistant Organiser Within one year the union had held 324 meetings, established 89 branches with 3,000 members

The union introduced a unique part time organiser role called a "walking delegate" who was paid 2s a day to organise the first of whom was William Codling of Briston By 1909 the union had 4,000 members

In 1910 mayor strikes and disputes broke out at Trunch, Knapton and St Faiths. At St Faiths the 105 union men were on strike from May 1910 until February 1911 for 1 shilling a week extra - but the strike ended in failure when it was called off by the Executive (not Edwards)

William "Bill" Holmes NUAW General Secretary once told an audience of American trade unionists: "In many of our villages, a man who joins a trade union is worthy of the Victoria Cross that's won on a battlefield. In many villages he dare not be known to be a member of the union. But to be a branch secretary ! That is to risk one's livelihood every day in the week"

The union's journal was "The Landworker"

Later becoming part of the Transport & General Workers Union in 1982