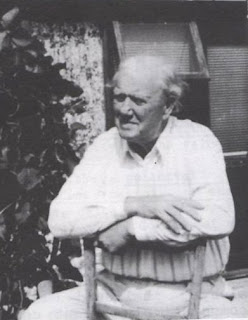 Agricultural workers union activist and communist councillor, Wilfred Randal Page was born on 11th September 1913 at Catton, Norfolk, in great poverty. A lasting influence on his life was his Sunday School teacher, Bill Furness, a Primitive Methodist who was one of the leaders of the 1923 farmworkers strike He joined the RAF in 1932 and went into a post in pioneering aerial photography during WW2. While in the RAF he was won to the ideas of the CP.

In 1945 he became the election agent for Edwin Gooch, North Norfolk Labour MP and President of the National Union of Agricultural Workers.

But was elected as a Communist councillor in 1946 for Erpington on Norfolk Rural District Council (originally as Labour until he joined the Communist party in 1950), he served until government re-organisation in 1974.

For most of his life he lived with his wife Christina nee Beesley, a popular shop workers union activist and union executive member, and his son and daughter (incl Carol Lorac) at Overstrand, Norfolk.

He was convenor of the CP’s agricultural advisory committee, CP Executive member 1967 - 1973 and Editor and regular contributor to the CP’s rural journal
Country Standard, campaigning against low pay, abolition tied cottages and nationalisation of the land.

A staunch member of the National Union of Agricultural Workers, he was finally elected to its executive in 1969. Key player in the move to merge with the T&G in 1982. Member of TGWU GEC from 1982 to 1984.

Wrote a number of pamphlets on agricultural issues including “Farming to feed Britain” a CP booklet in 1976.

He remained was Chairman of Trunch TGWU until his death, Chairman of Norfolk County Council Trades Council. Organiser for many years of the annual
Burston School Strike celebrations.

An “electrifying public speaker”, he fronted the NUAAW campaign for land nationalisation on TV and radio in the media

Wilf became President of the European agricultural workers federation but had to retire due to ill health in 1980. In 1989 he set up a local pensioners movement, which grew into thousands covering the whole of East Anglia, finally he became the first Vice President of the National Pensioners Convention.

Page was passionate about the Peace movement involved in trying to close down American bases in East Anglia and famously at USAF, Scunthorpe helped form Cromer Campaign Against Nuclear Disarmament (CND)

Despite being confined to a wheel chair (paid for by grateful union members) he continued to campaign. In the last five years of his life were spent at Halsey
house, British Legion nursing home in Cromer.

Wilf Page remained a committed Communist, however it was said of him that he was “never the big Russian bear, but the community owning the wealth communist”.

At a Memorial at Norwich Labour Club in May 2001, attended by TGWU General Secretaries Jack Jones and Ron Todd and Labour MP’s Ian Gibson and Gavin Strang. Jack Jones stated “I was always impressed by his wonderfully simple and clearly stated approach to problems of people, agricultural workers especially and pensioners more recently.”