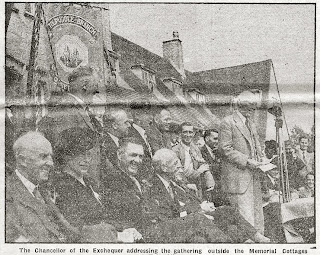 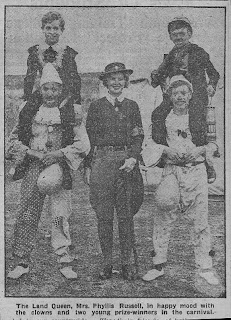 THOUSANDS of farm workers and their families from all parts of the county, and some from farther afield, poured into Dorchester on Saturday for the carnival on Dorchester Football Club’s ground in connection with the Tolpuddle Martyrs celebrations.

“British agriculture is the greatest dollar saver of all” he declared.
“It is also the greatest direct contributor” to the maintenance of life in this island.”

Accompanied by his Parliamentary Secretary, Mr. Dalton arrived in Dorchester by car from his Wiltshire home shortly before 1p.m. and was greeted outside the British Restaurant by Mr. E. G.Gooch, M.P (Norfolk North),. President of the National Union of Agricultural Workers (NAWU), and other officials; national and. local. - All had lunch in the British Restaurant.

Meanwhile the carnival procession was assembling on the barrack square at the Dorset Depot and when all was ready Mr. Dalton, accompanied by officials of the N.U.A.W., walked ahead of the carnival through the town to the Football Ground. Immediately behind them were the N.U.A.W. standards of the counties of Leicester, Kent, Wiltshire, Hampshire, Gloucester .and Dorset and some 13 Dorset branch standards.

Crowds lined the route of nearly a mile and the ancient Roman amphitheatre of Maumbury Rings served as a natural grandstand for many of them. The leading vehicle in the procession was the “chariot” of the Land Queen, Mrs. Phyllis Russell, of Wyke Regis, Dorset, who was selected for the honour from some 315 members of the Women’s Land Army in Dorset. Resplendent in her robes of office the Land Army Queen was attended by four ladies-in-waiting.

Hundreds of people were still trying to gain admission to the football ground when Mr. Dalton made his opening speech. Through loudspeakers. the audience heard him tell of the “changes in ‘farming and the position of agricultural workers since 1934—the year of the Tolpuddle centenary celebrations. “You have only to look around the British countryside to see the tremendous change for the better .which has-been brought about.

“The war imposed great tasks on our farming industry and the British farmers and their workers fought, hard and long to make their indispensable contribution to

the common., effort; The. New problems which we face in this post-war period are an equal challenge and the Government are” determined to give agriculture and the land worker a fair deal.”

Speaking of the great changes in the pay of agricultural workers and commenting on the fact that the reason the martyrs of Tolpuddle formed their union more than a century ago was because their employers were trying to cut the weekly wage from 9s to 6s a week, he said.. “wages are not the only things that matter in the life of the agricultural worker. Living conditions in the countryside, especially housing, must be improved, We have many decades of neglect to catch up, but the Government are pressing on with new buildings as rapidly as possible.” “In addition, we are pressing on with the installation of water and other services which are sorely needed in our countryside.”

The sum of £15 million is available in England & Wales for these purposes. Tell your local authorities this. If any of them are slow, buck them up, Get more Labour fellows on your local councils. In all this work we are greatly assisted by the N.U.A.W. .Your officials know I am one of those people who have always put the agricultural workers high on the list of organisations to whom I want to make a contribution. “

Telling his audience that the Minister of Agriculture and others of his Government colleagues were in constant touch with the unions, Mr. Dalton added, “ This cordial co-operation between the unions and the ‘Government is the martyrs’ finest memorial. ““I should like to say not only to my audience here but to the country as a whole that our agricultural production last year provided us with only one-quarter of our bread, 12 per cent of our cheese, seven per cent of our butter, 27 per cent of our sugar—thanks to our sugar beet output—36 per cent of our bacon and 44 per cent of our fresh meat ration. For the rest of our food we depend on overseas sources for which we have to pay high prices, mostly in dollars. “British agriculture is the greatest dollar saver of all. It is also the greatest direct contributor to the maintenance of life in this island.’ Milk production, which stood at 97 million gallons a month 10 years ago, averaged 125 million gallons a month last year.

“All that extra milk Is being consumed in this country and the results can be seen in the improved health of our young people and of the mothers and babies.

Farming is now a stable industry with a fine’ future before it, but if it is to realise all our hopes it must have a constant flow of new recruits, both men and women.

There are at present 180,000 more British workers on the land than in 1939, including those wonderful girls of the Women’s Land Army. They have done a fine job for their country, and I hope they will stay on the job – and bring in their friends, of both sexes. In addition there is still a large contingent of foreign labourers, especially German Prisoners. But these are returning to Germany in a steady stream

“They must be replaced by British, workers if our agriculture is not once more to lose ground. I hope that many of our young people will find on our own countryside in the years to come a, healthy, happy and productive future.

”The Chancellor, introduced by Mr. Gooch, congratulated the N.U.A.W. on their initiative in organising the great week of celebrations in Dorchester and re-called that he attended the centenary celebrations with his old chief, Mr. Arthur Henderson.

Introduced to the crowd as the man who had “done all the work” in connection with the celebrations Mr Arthur E Jordan NAWU county organiser, paid tribute to, the splendid workers on his committee

Unveiling a tablet to the martyrs outside the Old Shire Hall in the morning, Mr. Gooch MP and NAWU President said the placing of the tablet here was part of the connected story of the martyrs. Down in the village of Tolpuddle itself there were heaps of memorials, but in Dorchester there had been nothing tangible up to now.

passed on these six men.” The tablet was actually an oak framed replica of the real one which is to be cast in bronze with letters in relief. It has been prepared by the offices of the County Architect and read:

“In this building on March 19, 1834, the six Tolpuddle Martyrs were sentenced to seven years’ transportation for their part in, the founding of rural trade unionism.”

It hangs on the outer wall of the actual Assize Court in which the men received their sentence,’ and, recalling this fact, Mr. Gooch said he was proud to think that though, farm workers were led away from that Assize Court in chains 113 years ago, to-day men left the plough and work-bench and take their place on that bench of justice.

He said the union was indebted to Dorset County Council for allowing them to place the tablet on the wall. “Not many councils would have done it,” he declared, “but in Dorset they are big-hearted enough to allow us to do It. We do thank the council.”

The six-a-side ladles’ football match between. Weymouth and Westbury, played on the Depot sports ground, was won by Westbury.

Maiden Newton and Puddletown met in the final of the inter-branch tug-of-war contest for the challenge shield. It was won by Maiden Newton team which included the five Caddy brothers who, after their success, returned to milking duties on a farm near the village.

There were sideshows and agricultural exhibits and music came from the Whitechurch Brass Band, the Durnovaria Silver Band, and recordings from the C.W.S. (Co-op) mobile cinema, which also showed films.

Chancellor headed a procession of nearly a 1,000 from the Memorial Cottages through the village to the chapel and back to the Cottages, where a large crowd bad assembled on the lawn to hear him make his second speech.

During the afternoon visitors viewed the cottages and the Memorial Hall, visited the grave of James Hammett, one of the martyrs, and the cottage where the six-men held their meetings.

Mr. Dalton dealt primarily with the history of the Tolpuddle Martyrs—the six men, he said, who, by a shabby trick, were wrenched from their homes, confined in local prisons, then to the noisome hulks which stood around our coasts to receive the overflow of prisoners from the gaols on land, and finally transported to .Australia in hell-ships.

“Lord Melbourne and his ally in this district, George Frampton, the squire, thought this savage treatment would stamp out the growing power of trade unionism, not only in Dorset, but over the length and breadth of the kingdom. They should have realised that the English people are not so to be coerced. . .

We pay homage to the fearless honesty of the six men of Tolpuddle and to their refusal to compromise their simple faith in order to obtain quick release from their ordeal. Their names shall be remembered for ever and we who come after must be worthy of their example and their courage.”

WILL NOT LET THE COUNTRY DOWN

The assembly was also addressed by Mr. Gooch, MP and NAWU President who said that securing another 10s a week for agricultural workers carried with it

obligations not only to employers but to the people In the towns and cities who wanted, food. It also carried obligations to the Government, and the best service the farm workers could give was to produce as much as they could on the farms of this country so that the Chancellor could have a few more dollars to put in his pocket for other things. “The farm workers will not let the country down,” he added.

Speeches were also made by Mr.George Chester, of the T.U.C., who said he was attending the demonstrations on behalf of the eleven and a half million organised workers in this country. Mr Bert Wellstead, NAWU County Chairman and Mr. Alfred C. Dann, General Secretary of the NAWU union, “ Don’t run away with the idea that in these days we have no feudalism,” said Mr. Dann “It still exists to some extent in the countryside. We still have the tied cottage system which enables some employers—not all—to use the power of the tied cottage to achieve their own point of view. Just as the Tolpuddle Martyrs fought as they did so the whole of our membership will go on and on fighting until we have got rid of that system.”.

Methodist services in connection with the celebrations were held in Dorchester and at Tolpuddle, the speakers being Lord Ammon and Mr. Sydney Dye, M.P.(Norfolk South West)