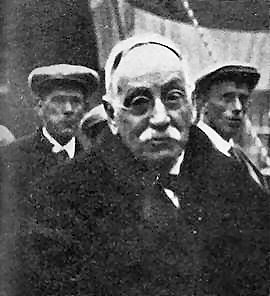 George Edwards was born in Marsham Norfolk, the son of a Crimea War solider who had later become a farm labourer,

The man had a wife and seven children to keep, and, as he had fought in one of his country's wars and had had spoken up for the “half-starved unemployed of Marsham”, he was refused work and deemed by the farmers " inefficient," and when he did secure work his wages were just 7s. a week.

His father forced through hunger and grinding poverty, had been caught in the act of carrying away five turnips from a field.

Thomas Edwards was fined 5s. and sacked. He and his family had to go into the workhouse, and "it was from within its walls that little George Edwards was born 1850" according to one account or another account has him born in a two room red brick cottage in the village

Aged five he was forced to work in the fields to scare the crows for a shilling a week. There were no Sundays in those weeks, and the hours were from sunrise to sunset.

He became an active lay preacher for the local Primitive Church

If the child was caught sleeping at the post of duty, he was thrashed and fined. These were the beginnings of the man who, when earlier movements had died down, made Trade Unionism again a power among the rural workers,

He never went to school, and did not learn to read and write until he was taught by the devoted wife Charlotte Corke, who he married in 1872.

As a farm labourer George Edwards knew the bitterness of poverty and oppression, in 1872 he had joined Joseph Arch’s National Agricultural Labourers Union in 1872 and was victimized for doing so.

Again in 1889, he was approached to become the secretary of a new union the Federal Union, Cromer District, later known as the Norfolk & Norwich Agricultural Labourers Union. Despite his strenuous work, this union, like many others of the kind, went under in 1896.

Ten years later, on the labourers again asking him to lead them, he founded the Eastern Counties Agricultural Labourers Union, later the National Agricultural Workers' (now part of the TGWU).

Throwing all his energies into the work," he cycled 6,000 miles in the first year to obtain members, and enrolled by his own efforts 3,000 men. His salary was 13s. a week, and after the first year 23s. and expenses. On resigning the secretaryship in 1913, he was made a life member of the executive.

Tom Higdon a village school teacher (later made famous as School master at Burston) recalled attending a meeting at which Edwards spoke in 1907 (then nearly sixty) in the Plough public house, Wood Dalling

“He was a little man…. His chin clean shaven, leaving a line of thin whiskers round his neck. He had a bit of a boyish moustache, though his original and interesting face bore many and deep traces of the hardships he had undergone all his life, while his frail bent form told the same tale”

Higdon not only joined the union but become the local branch secretary,

Since early manhood he has been a Primitive Methodist Lay Preacher. He was elected as a Liberal Councillor to Norfolk County Council in 1906, and to the local Poor Law Guardian, a County Council Alderman from 1918 and a Magistrate from 1914. His First world war work on committees won him an O.B.E

He oversaw the great Norfolk Agricultural workers strike of April 1923, which at its peak saw 10,000 men on strike. The strike headquarters being at Kier Hardie Hall, .

George Edwards was Knighted in 1930

His autobiography written in 1922 , " From Crow-Scaring to ," is a human and social document of real importance.