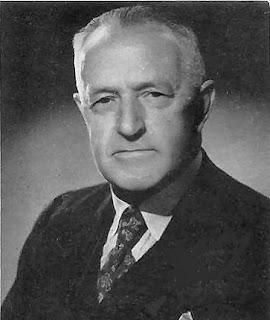 County Alderman
In 1935 Wymondham Urban District Council was created. Edwin Gooch became the first Chairman of the new UDC and held the office for most of the period up to 1946. His wife, Ethel Gooch, became the council's first lady member in 1935 and its first lady Chairman in 1951.

At the 1931 general election, he was an unsuccessful candidate in the Conservative-held South Norfolk constituency.


The Country Standard of Autumn 1964 stated

Generous tributes have appeared to the memory of the man who was the N.U.A.W. President; the first farm workers' M.P., in the modern age; Chairman of the
Labour Party and one who throughout his long life was in close and intimate touch with the workers he represented in so many ways.

There is no need to add to these in the "Country Standard" which in any case is of necessity very late with its appreciation.

We recall how in the very early days of this paper,before even the very first number had appeared, the Editor to be, who is the Editor still, went to get the
advice of Edwin Gooch and, if it might be, his blessing.

He got both and will never forget the friendly reception he received from Edwin and his first wife; followed by articles in the early days of the paper.

Brother Gooch must have violently disagreed with us on many occasions since; I hardly suppose he expected anything else for he was not a man who stood out conspicuously on the side of the Left any more than he committed himself to the right.

But I like to think, and I do believe, that he never regretted the existence of the paper to which he had been so generous in its beginning.