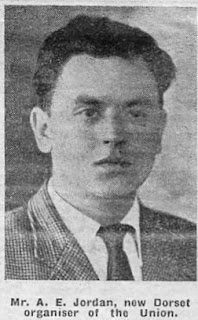 Arthur Jordan was born 24th January 1918 in Stratford upon Avon, his father was a postman and his mother ran the refreshment room at station. Both made sacrifices in order that Arthur may secure a decent education in order that one day he may become a station master.

Through her efforts he attended the prestigious in , but later Arthur described the experience as “dreadful” and spent the rest of his life trying to secure a decent education.

He started work as a booking clerk for the LMS railway at Stratford station until World War Two, as a committed pacifist he chose to work in agriculture rather than join the Forces and it is believed he initially secured work in the West Midlands working with traction engines and was involved in Stratford branch of the NUAW, which he established in 1943. According to Warwickshire NUAW organiser F. Harrison,stated "the fact that there were now some 10 times as many branches in Warkshire as in 1939 was in no small due to Mr Jordan's efforts, for he travelled many miles and visited many villages in his enthusisam to organise rural workers" ( In October 1944 He stood as Labour candiate for Guild Ward in the Stratford municiple election)

In April 1945, twenty eight year old Jordan secured the post of Dorset Organiser for the National Union of Agricultural Workers , a post he held for the next 17 years from 1945-1962.(succeeding the late Alderman Fred C. James) He proved to be very popular and successful and it was said that he was loved by the membership in Dorset but hated by the right wing union leadership of the union.

In 1952 it was reported that the union represented 90% of all agricultural labourers in the . Moreover, had secured improved pay for Roadmen and sought to improve their status.

His tireless efforts ensured the remarkable achievement of 100% union membership in the villages of Sutton Waldron, Fontmell Magna and Tarrant Hinton. A contemporary article in `Land & Labour’ stated that only in counties of , and could win comparably high membership of the union and even then it went no higher than 80-90%. He also was Secretary of Blandford Trades Council, where he lived and worked; even his NUAW office was in Blandford.

Jordan was also the Tolpuddle Martyrs rally organiser and therefore also a regular speaker at the event, galvanising it into a memorable and permanent feature of the labour movement’s calendar. This was no mean feat. In 1952, there were only some 500 (some newspapers said 200) turning up for the annual Tolpuddle rally. The Labour Party also threatened to boycott it due to the heavy Communist involvement.

He organised visits to the mines and their NUM in the 1961. In 1960 organised a visit of NUAW members to Deep Duffryn mine, Mountain Ash, then a Communist stronghold. He reprised the trick for a visit to the Standard Motor Company, whose convenor was the legendary Communist, Bill Warman, in order that town could understand countryside and visa versa. even arranged a day trip of 800 union members to the . A delegation was mobilised for a national agricultural workers’ demonstration for better pay on October 28th 1954. Perhaps this prompted the ordering of a new banner, unveiled in November 1955; this was based on a solar design set against two labouring workers.

His Chairman was Jess Waterman, the NUAW Branch Secretary at Spettisbury from World War 1, who was also a Communist Party member. This support enabled, for example, the April 1960 organised mass boycott of South African goods in the area by NUAW activists.

Jordan who on arrival in Dorset had been in the Labour Party, had like some of the best union organisers Wilf Page (Norfolk) Dunman (Oxfordshire) Savage (Essex) and Wogan Phillips (Glos).

He was a capable organiser also for the Communist Party as well, serving for a period of 12 years on the Party’s Executive Committee. In 1956 the CP had finally established monthly meetings in Dorset, A branch of 13 at Blandford (where he lived) had been established in 1950, Jordan reporting in the Communist Party’s `World News & Views’ in April 1958: “Over the years we have had successes and failures but whilst we cannot claim to have increased the size of the party in Dorset or to have established the Party as a political force we do feel prod that these comrades isolated as they are should have remained steadfast during the recent difficult period” (Dorset lost 4 members over the Hungary invasion.) The local Party women also organised a market stall at Christmas time in Blandford to sell food, toys, and clothes.

Despite doubling the union's membership in , he was sacked by the union in December 1962 mainly due to his Communist Party activities and allegiance. Arthur Jordan was 'sacked on the spot.' by the Union E.C. only a day or two before Christmas. The Press reported the General Secretary, Harold Collison, as saying he had been dismissed “for actions- where he had not conformed to Union Policy." Although he had added: “Mr. was a good organiser."

The Committee passed, unanimously, a resolution calling for 's reinstatement, and sent a deputation to the EC to argue its case. ’s own statement to the press [Country Standard winter 1963 edition] revealed that the actions complained of were:—

1) Writing an article in the Dorset N.U.A.W. Bulletin demanding higher pay for farm workers and contrasting their pay with that of the police and mentioning the latter's method of dealing with ban-the-bomb demonstrators.
2) Accepting an invitation to speak to Salisbury Trades Council before obtaining the permission of the General Secretary, although no date had been fixed and he had made it clear to the T.C. secretary on the phone that he should have to have Head Office permission.
3) Writing an article (albeit in a strictly personal capacity) about British agriculture in " Land and Labour," a journal of the World Federation of Trade Unions.
4) Reporting in the Bulletin and in the "Land and Labour " article that a majority of both farm workers and farmers are expressing opposition to the Common Market.
5) Reporting (correctly) in the article that large numbers of resolutions were calling for a more determined attitude by the Executive Committee to secure a £10 wage for farm workers.
6) Inviting a member of the from another district to participate in a television programme. On this issue, the EC accepted his explanation.

This was not the first time that the EC had interviewed about similar matters, but he categorically denied the General Secretary's statement reported in the Press to the effect that he had not conformed to union policy. He remained understandably bitter about this episode for the rest of his life, but often reflected upon the compensation he had secured on behalf of his members.

He then moved to , where he initially secured a post with BALPA, the airline pilots union, before securing a job at Collett's publishers, who imported books from . It was he who oversaw their move from to Wellingborough. The Collett’s staff, many of whom were Communist Party members, was active in the shop workers union and dominated the local Wellingborough Communist party branch. It was at Collett’s in 1965 that he met his second wife, Elizabeth Frood, the daughter of a Communist teacher. A family he had known for many years.

On his retirement from Collett’s in 1969 he moved to the , outside , Northamptonshire and built with their own house. After his retirement he became involved in teaching for the WEA and later (from 1980) for on issues as diverse as medieval history and transport. He secured an Open University degree to make up for his “dreadful” childhood education.

He had one daughter, Rachel, by his first marriage and died on , aged 88, still a committed Communist Party member.

(Blandford was also where the National Union of Agricultural Workers Dorset office at 5 The Cliff, Bryanston also living in the village )